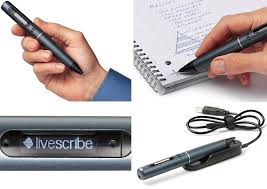 In a recent NewHabits-NewGoals class, I met a participant who shared with us a rather early version of a pen called LiveScribe.

She admitted that it didn’t work very well, but when she explained the idea I was struck that it could be transformed into the perfect manual capture point – and not because of its ink.

The idea is simple:  the pen is a very special one with some built-in storage capability.  It allows you to write on some special paper, and it records the words you have written into the pen itself, in addition to the paper you are writing on.

Once you get back to your computer, you can download all the notes to a page, and if it can understand your handwriting, it will transcribe the words into English.

It’s a bit fat in size, partly because it also has a built-in sound-recorder and a speaker.
I believe that it’s pitched to students who want to have access to their notes, but I think they are missing a great opportunity…

Here’s what I would do differently.

1.  I’d sell a version of the pen that leaves out the voice recorder and speaker.  Most people who take written notes don’t have a habit of taking notes via sound.  The extra capability could be taken out, which would reduce the size of the pen, and also the price.

2.  Sell more options of the special paper, in different sizes

3.  Develop a way to make notes without the special paper (which happens to be pretty expensive)

4.  Find a way to differentiate items that contain time demands from those that don’t

I’d market this new pen as a capture point that makes the paper that’s being written on obsolete.  The paper would actually become a form of backup, if you can imagine that.  Your pen-written notes that include time demands would be downloaded to your email Inbox and processed alongside the other items.

Here’s the link to the website that describes the product.