You are a productivity enthusiast who wants to experience one improvement after another. This kind of progress is sweeet. Like dominoes falling. Or climbing from one level to the next in a challenging video game.

But once you know the problem you want to fix, it’s hard to find simple solutions. The proof? Just check out someone asking for help in an open forum like Reddit.

Someone posts a question, and wants a simple answer they can actually use. What do they get back? A ton of answers. There is no way to make sense of the flood of opinions…some of them openly contradict each other.

Heck, I came across a big one the other day reading Getting Things Done. On p40 and 142 of the 2001 book, David Allen strictly prohibits time blocking. But on page 87 he says Quote “I recommend that you create a block of time to initiate this process…”

It ought to be easier to find simple solutions than this!

Well…our job in this episode is to ask the question “Why aren’t simple task management solutions easier to find?”

Visit www.replytofrancis.info to leave us some feedback or ask a question via text or voicenote communication

This episode is available on our YouTube channel. https://youtu.be/VzCBXTxO9ek

https://timeblockingsummit.info to register for the next summit

https://mightytaskers.ScheduleU.org to join our community

https://www.patreon.com/francis_at_2timelabs to support this podcast with a donation.

Remember to subscribe to this podcast via Apple, Google or your favorite podcast player.

Francis Wade is the host of the Task Management & Time Blocking Virtual Summit and the author of Perfect Time-Based Productivity. Connect with him on Linkedin or send a message here. www.replytofrancis.info 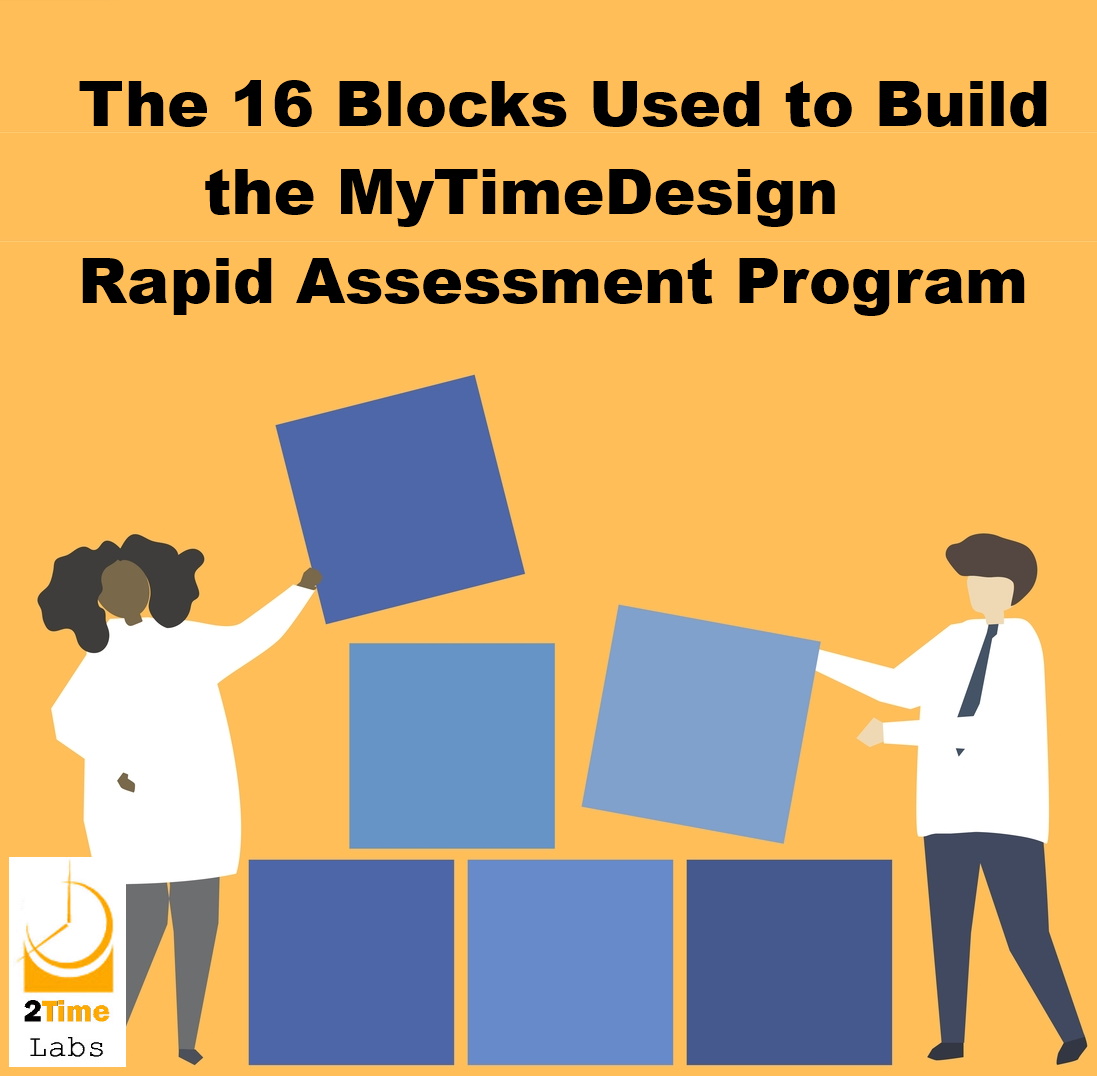 Have you ever wondered how we teach self-evaluation skills to our learners at 2Time Labs? If you have, you may have noticed that we combine a number of separate ideas into one wherever possible.

But it’s not as if we tell you what’s in the original stew of ideas!

In this series of 16 posts originally appearing on Medium, we break the Rapid Assessment Program into its key components.

We have taken the liberty of posting the following 10 posts (numbering 7-16) individually in future blogs on this site, each in its entirety.

As you may know, Quora is a question and answer website where people ask specific questions and receive answers from the general public, some of whom are experts.

Since January 2016, I have been answering a number of questions in depth on different topics related to the work we do at 2Time Labs. Here is a sampling of the answers provided.

We live in a world in which we receive a lot of data, and behind it there’s an even greater avalanche promised. How do we make sense of it all? And who has the time?

App designers and developers who have found ways to gather this new data need to take a step further and teach us – the users – how to gain important insights without devoting our lives to sorting through mountains of information.

In the third and last piece of the manifesto for The Notified Self, I focus on a few of these skills. They are fast becoming a professional requirement for lives in the modern world where new sensors are giving us unprecedented access to data about ourselves and the world around us.

Now, we need to develop these hitherto unforeseen skills to merely keep up, a critical aspect of the equation that software and wearable companies seem to have overlooked.

Visit my article on Medium – How to Use Data-Driven Insights to Accomplish the Informed Self.

I just posted a followup article on Medium that addresses the second component of The Notified Self.

It’s called “The Warned Self” and it’s all about creating alarms which alert you when a part of your life has become problematic.

As you can imagine, having this aspect of your life properly constructed can deeply enhance your peace of mind, preventing you from having to continually look over your shoulder.

The article is entitled How to Set Up “The Warned Self” to Protect Your Peace of Mind.

I just released a new post on Medium about notifications, interruptions and notifications that will occupy the attention of 2Time Labs for the next several months.

It’s a new concept called “The Notified Self” – the vision of a professional who is perfectly notified by the digital ecosystem formed by his/her devices, apps, platforms and programs. It’s the logical next step after the Quantified Self (QS).

In other words, now that all this new data is available from QS, how does it need to be managed in order to benefit the user? Or in other words, how do we focus our attention on the data so we don’t become overwhelmed?

Click here to see my long form post on how this problem needs to be tackled with respect to Interruptions. It’s the first part of a three part series. The second part on The Warned Self is here.

If this a topic you already have an interest in, it might be an opportunity to apply to the next InnerLab.

I just gave an update on a project underway here at 2Time Labs called “Can Time Be Managed?” Check this link for a short post on my book’s website.

Between June and October I haven’t posted a single time to my blog. I have a good reason… but the bigger story is that a new calendar software I was testing saved my skin.

Find out why at this post on my book’s blog and while you’re there, sign up for the exclusive private Beta i am excited to be launching. How is it that the above graphic encapsulates the past few months I spent writing Perfect Time-Based Productivity – A Professional Approach? (The book is 90% complete and will be released in September on Kindle.) This graphic is a perfect example of some of what I had to do to bring it to this point. It shows:

These are just a few of the concepts I have wrestled into my book. To sign up for early notification including free launch bonuses, visit my book’s website and join the list for further information.

A few years ago, I remember talking with a friend who was telecommuting and saving an hour each way in traffic.  At first, it sounded great!  That is, until I heard about the electronic snooping, keystroke recording, logging and clicking in, and webcams that were used to track whether or not she was really working or goofing off.

It sounded worse than working in the office.

A couple of companies have moved in completely the opposite direction, and given their employees complete freedom to set their own hours.  What’s remarkable is that these companies are are well-known national retailers:  Best Buy and the Gap.

Not only are they allowing their employees the freedom to do this, but in a recent study of the results at Best Buy, those who chose to set their own hours were found to be taking better care of their health, experiencing less work-family conflict and reduced turnover (from 11% to 6%.)

While this is good news, it would be interesting to know what the impact might be on the productivity of the salespeople who are the targets of the ROWE program. (ROWE stands for “Results Only Work Environment.”)  That would truly get the attention of forward-looking companies.

What caught my attention, however, was the fact that there was a control group that did not sign up for the ROWE program.  It made me think that there might be some who are just not interested in that much freedom, and just want to collect a paycheck for doing a certain amount of work.

It also made me think that the company would do well to give their employees in the ROWE program an opportunity to upgrade their time management skills. Simply giving employees the ability to manage their own time does not necessarily mean that they are more effective.

In fact, giving them more freedom would make things more difficult for anyone who must now make a number of new decisions about how they schedule their time, for the very first time.  Without higher skills, they could easily find that their productivity drops.

This isn’t as unusual as it sounds.  Whenever we undergo major life changes, it’s often the case that a review and upgrade of our personal productivity is required, just to be as productive as we were before the change occurred.

For example, I moved my place of residence over the weekend to an older residence with a gorgeous view of the Jamaican interior.  As beautiful as the view is, moving has always caused a dip in my productivity as habits that were prompted by the physical environment need to be re-crafted from scratch.

The effect of these major life changes, whether they be a relocation or a ROWE program, is tremendous, and they deserve to be respected as such.  It’s a good time to revisit our time management systems to see whether or not they can, in fact, hold up.

(The picture above was taken yesterday morning, our first.)

We use cookies on our website to give you the most relevant experience by remembering your preferences and repeat visits. By clicking “Accept All”, you consent to the use of ALL the cookies. However, you may visit "Cookie Settings" to provide a controlled consent.
Cookie SettingsAccept All
Manage consent

This website uses cookies to improve your experience while you navigate through the website. Out of these, the cookies that are categorized as necessary are stored on your browser as they are essential for the working of basic functionalities of the website. We also use third-party cookies that help us analyze and understand how you use this website. These cookies will be stored in your browser only with your consent. You also have the option to opt-out of these cookies. But opting out of some of these cookies may affect your browsing experience.
Necessary Always Enabled
Necessary cookies are absolutely essential for the website to function properly. This category only includes cookies that ensures basic functionalities and security features of the website. These cookies do not store any personal information.
Non-necessary
Any cookies that may not be particularly necessary for the website to function and is used specifically to collect user personal data via analytics, ads, other embedded contents are termed as non-necessary cookies. It is mandatory to procure user consent prior to running these cookies on your website.
SAVE & ACCEPT